During the normal opening and closing of electrical contacts wear and material transfer occurs due to several mechanisms that lead to performance degradation and eventually the failure of the contact. Characterising and quantifying material transfer is an important metric in evaluating these processes however techniques such as weighing do not distinguish where material transfer has occurred (zero mass erosion). 3D profiling of the surface offers a valuable insight to these processes.

A switch contact that has experienced several thousand switching cycles has been measured using a XYris profiler. The important step is to establish the datum against which volume change is considered. This must be repeatable and accurate. We could remove a previously measured form from the surface to directly compare the difference however as the original surface is nominally spherical and has a considerable region that has not been effected, it is convenient to fit.

​This is achieved by applying a fitting algorithm to the undamaged surface. In this case we have used a spherical fit and determined the radius of the nominal spherical surface is 2.3584mm. This is well in keeping with the designed dimension and tolerance. Further the measurement agrees with the measurement made before the contact was eroded.

The volume of erosion and relative depth of erosion can now be simply calculated at any point of the surface, relative to the original surface position as a datum. For this surface there is 0.020336mm3 above the datum (deposited) and 0.024060mm3 below (eroded) – or roughly 85% of the material volume from the pit has migrated to the rim region.

​The fitted data can also be presented for visual analysis as below. The measurement of the contact was performed in 8 minutes with a XYris 4000CL. All the data analysis presented was carried out with the BODDIES and VIEWER software packages supplied with the Taicaan XYris series of surface profilers. 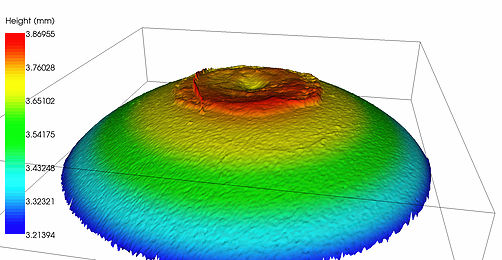 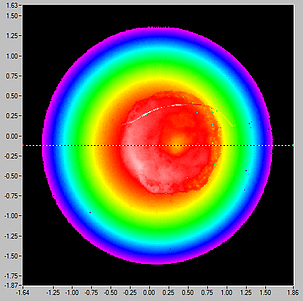 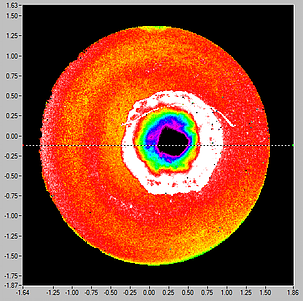 Plan view of fitted surface with 2D profile along dotted line before and after form fitting.